Greetings and welcome back to another jam-packed academic year!  Things are starting out full-tilt for CUE this year, adding several new initiatives, you will read about in this issue. Here are just a few highlights. …More>>

CUE Awarded a Baldwin Grant and a Morgridge Match, by Sue Stanton and Marian Slaughter

In May 2013, CUE and Professor Gloria Ladson-Billings (UW-Madison, Department of Curriculum and Instruction) were awarded for full funding from the Ira and Ineva Reilly Baldwin Wisconsin Idea Endowment for a grant entitled,  …More>>

When CUE first opened its doors some three years ago, the majority of its assistance to communities came in the form of supporting long-term partnerships developed between researchers and community groups focused on collecting data and  …More>>

The Front Yard Gardens is a grassroots effort to beautify the neighborhood and provide healthy fruits and vegetables through “picker plots” that are open to residents in the Meadowood neighborhood. The Gardeners,  …More>>

Also in this issue 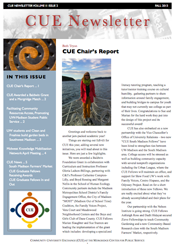