There is a strong food culture in South Madison.  More than just a meal, the local community considers food a key factor in engaging community members.  A few local groups have initiated a variety of food-related programs.  Human capacity to be involved, however, have been an ongoing issue.

This issue led Dr. Margaret Nellis to put out a flyer on campus asking for interns to assist with the South Madison Farmer’s Market.  From only two interns in 2009, the student involvement in South Madison has grown to a cohort of eight interns every semester, who co-facilitate a one-credit module with Dr. Nellis.  They have worked on multiple projects along with coordinating volunteer opportunities for Slow Food UW, a campus student organization.  “I’d say over a hundred Slow Food UW students have participated in at least one activity in South Madison,” according to Dr. Nellis.  Because of Dr. Nellis’ involvement in CUE South Madison, these ongoing food projects were integrated into the CUE matrix during the pilot year.  Since then, the Slow Food UW has been among CUE’s continued supporters in promoting community-based learning on campus. 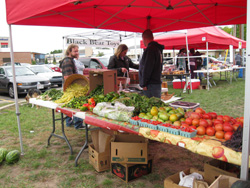 Aly Miller and Emily Duma, two interns in spring 2011 during the CUE pilot year, determined that the Slow Food UW involvement in South Madison should be directed to meet two primary objectives: (1) generating understanding of our privileges in the food system and using this knowledge to achieve social change, and (2) learning ways to be involved in improving South Madison’s uneven socio-economic landscape.  With the support of a $5,000 Wisconsin Idea Undergraduate Fellowship from the Morgridge Center awarded to Shelbi Jentz, Wally Graeber, and myself in 2011, Slow Food UW was able to specify four areas of activities for involvement: educating the community on sustainability and health, reducing health disparities, improving food access, and supporting Madison area farmers.

Building on these guidelines and with the support of the Slow Food UW team, Shelbi, Wally, and I organized a total of seven programs during the 2011-2012 academic year. Collaboratively with community partners, we 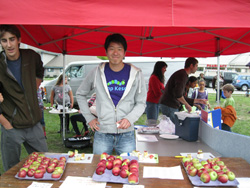 In all of these events, a total of 13 Slow Food student interns were involved, 62 meals were served, $5200 was spent, and more than 972 hours of community service were rendered for preparation.

When multiple projects work together in an area, the opportunities to multiply the benefits are greatly encouraged.  The collaboration between the Slow Food UW and Family Voices in South Madison resulted in the children who were enrolled in the program being able to participate in food preparation as educational enrichment while expanding their palates to include more fruits, vegetables, meatless main courses and lower sugar treats.  The parents looked forward to the new and delicious meals that their children helped prepare and sometimes serve.  Similarly, the Slow Food UW students’ passion and enthusiasm for cooking during the Teen Cooking Nights attracted young students into the kitchen to help cook, tell stories and bond over food preparation and sharing.  The same happened at the Badger Rock Middle School, where I provided assistance to a teacher.  Being exposed to hands-on fieldwork where they can learn how to prepare vegetables and cultivate their own garden sparks the conversation in the home about the importance of eating healthy and eating local.  This type of community education and action is really what the project was all about.  Shelbi recalls, “A memorable moment was when kids expressed to us that they sometimes go home and try the recipes [from their Teen Cooking Nights] with their parents.”

Reflecting on his experience, Wally says “Just telling someone that it is “good” to support local and environmentally friendly businesses is not enough.  Those words do not mean anything to them unless you can compare and contrast the effects, good or bad.”

When we open our minds to working with K-12 students, just like other members of a community, their highly critical way of thinking is very positive in helping future leaders.  Community-based learning like this is what helps students improve their  communication and civic engagement skills.  This type of community education and action is really what our project was all about.

It is the plan that Slow Food UW continues to engage South Madison community with their programs for healthy eating.  The next Wisconsin Idea Undergraduate Fellows affiliated with the Slow Food UW, Tori Law and Maddy Levin, plan on continuing their work and sharing more exciting stories. ￭